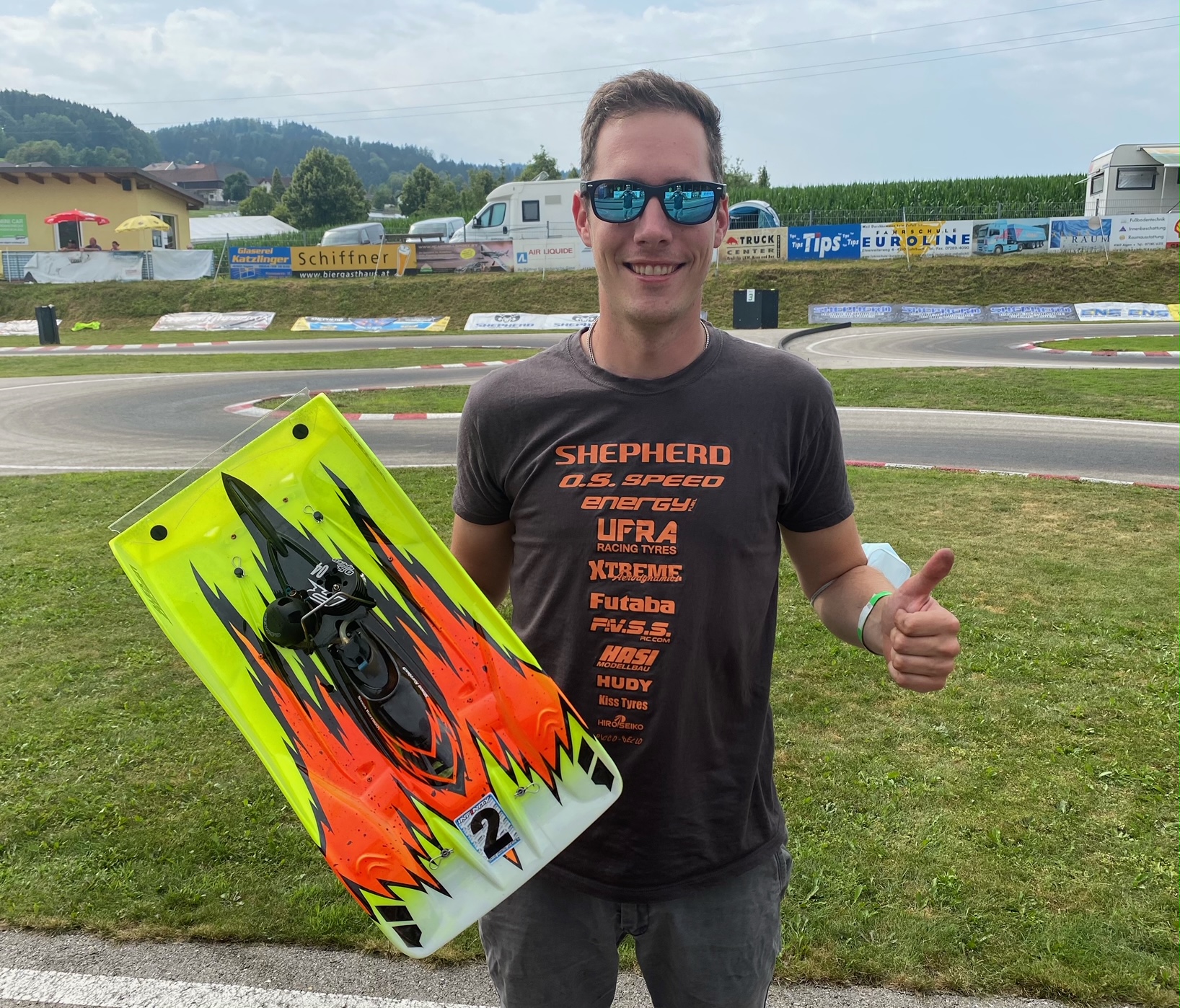 Friday saw a busy day with all four qualifying rounds held.  With each driver’s best two scores counting, it allowed for some mistakes, but with the close fields in all three classes, it would be tough to secure a top qualifying position.

Simon Kurzbuch added a sixth Aigen TQ to his resume.  He is now the only driver to start the 1/8 Final on at the very front here since 2016, making it six years in a row with a pole position at the Austrian track.

Behind the Swiss Shepherd driver, it was a close fight for the remaining top five places.  Merlin Depta (Germany/Serpent) was second in Q1 and Q2, with Toni Gruber (Germany/Shepherd) second in Q3 before Sasha Lackner (Switzerland/Infinity) had his best run of the weekend to go second quick in Q4.  Overall, Merlin will start second, his best ever ENS qualifying position, with Toni in third and Dominic Greiner (Germany/Capricorn) fourth overall ahead of Lars Hoppe (Germany/Shepherd) and Sasha.

Infinity’s Jilles Groskamp (Netherlands) eventually secured the TQ spot in 1/10 scale, but had to do it the hard way.  In Q1, Jilles threw his car off the track, giving Melvin Diekmann (Germany/Capricorn) a clear run to the fastest time ahead of his team mate Thilo Todtmann (Germany/Capricorn) and Milan Holthuis (Netherlands/Infinity).  Q2 saw Jilles get his engine tune wrong, and Juan Hidalgo (Spain/Serpent) put in the best time ahead of Patrick Schafer (Germany/Shepherd) and Melvin.  Jilles then had things more in control and topped Q3  by one second over Juan, with Patrick taking third to keep himself in the mix, with Jilles then securing TQ in Q4 with another best time, again ahead of Juan and Melvin moving into third.  The result in Q4 was the same as the overall starting grid for the top three – Jilles ahead of Juan and Melvin, with Patrick’s earlier result securing him fourth and Thilo lining up fifth.

Salven gets it done in Masters

Michael Salven (Netherlands) took the pole position award for the Masters class, but like Jilles in 1/10 he had his work cut out despite setting the best lap times in the class.  Q1 saw Torsten Muller (Germany) ahead of Remy Hasler (Switzerland), whilst Michael topped Q2 in front of Remy.  Remy then moved to the top in Q3 in front of Michael, before Michael secured TQ by setting the best time in the last round ahead of Remy.  Overall, Michael will start the race from the front, with Remy second and Torsten in third.  Arie Manten (Netherlands) had a difficult start to qualifying, but got things together eventually to grab fourth on the grid.

With the top two in tomorrow’s B Finals bumping up to the A Finals, the grids are still not fully set yet, as everyone’s attention turns to preparing their cars for the long finals – everyone at ENS getting at least a 20 minute race.