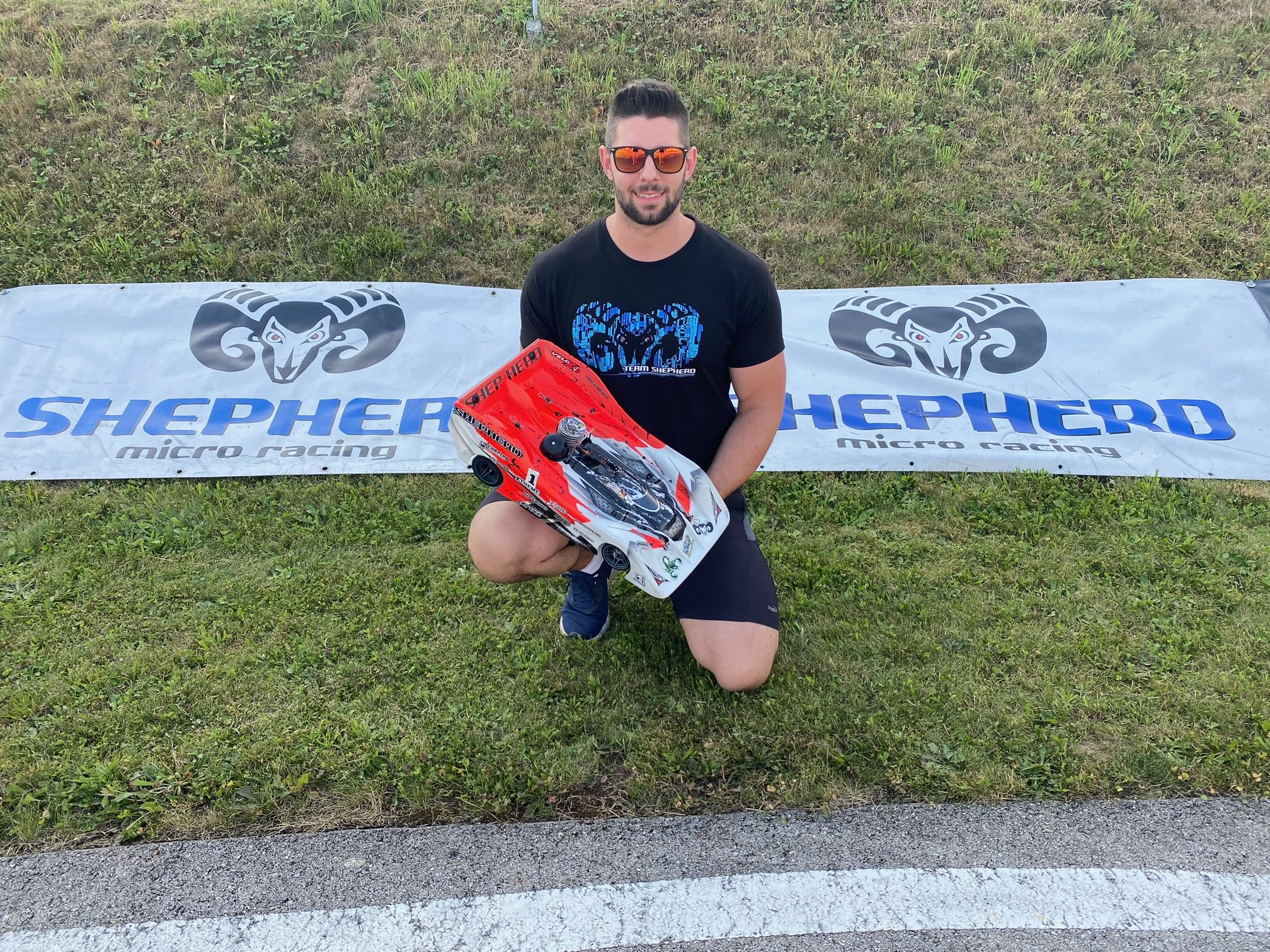 The Timed (“Seeding”) Practice rounds were run on Friday evening at the ENS.  Every driver had two rounds in which he needed to set his best consecutive 3 laps – the results of this would be used to sort the heats.  It also marked the time the official hand out tyres were used by everyone, so it was a real indication of everyone’s speed.

Despite his Shepherd team-mate Simon Kurzbuch stamping his authority on the earlier rounds, Toni Gruber will be the top seed in the 1/8 Scale Class this weekend as he used the very last minute of the run to put in the best time.  The German driver set a time of 44.956, with Kurzbuch’s best 45.042, almost nothing between them!  Toni explained they had tested a lot through the two days of practice, and put all the best parts together for the final round.  Behind these guys, Dominic Greiner (Germany/Capricorn) was third with 45.161, Merlin Depta (Germany/Serpent) fourth with 45.234, and Oliver Krähemann (Switzerland/ARC) continuing his great showing this weekend to be fifth (45.256).  But with one second over three laps covering the top 13 drivers, it’s very much open going to tomorrow’s Qualifying!

Diekmann fights back in 1/10 Scale

Melvin Diekmann made amends for being bumped from the top spot in the final round yesterday to move back to the top of the lists as he set the best time in the 1/10 Scale Class for Capricorn.  The German driver’s time of 50.213 was only just ahead of Infinitys Jilles Groskamp, as the Dutch driver set a time of 50.356.  Juan Hidalgo maintained his speed from yesterday, as the Spanish Serpent driver set the third best time, with Patrick Schäfer (Germany/Shepherd) going fourth and Thilo Tödtmann (Germany/Capricorn) fifth.  But as in 1/8 Scale, a super close field means any mistakes in Qualifying will be punished as it will be easy to drop a few places.

Long time ENS supporter Remy Hasler will carry the Number 1 tomorrow, as the Swiss driver put in the best Seeding time.  He was only 1 tenth of a second infront of fellow Swiss Jürg Nydegger, who in turn was just one THOUSANDTH of a second faster than German pilot Torsten Müller.  Rudi Scherer was the best Austrian in fourth, whilst Arie Manten (Netherlands) still has a little work to do as he set the fifth best time.  Michael Salven, who had been fastest in Free Practice, struggled in the seeding rounds, ending up only eighth fastest – so he will be hoping to find the speed he had yesterday again!

With the drivers now looking forward to their evening meal and probably a cooling shower, their thoughts will turn to Qualifying.  With four rounds on the schedule for tomorrow, it will be a busy day as they all fight for pole position in their respective classes!