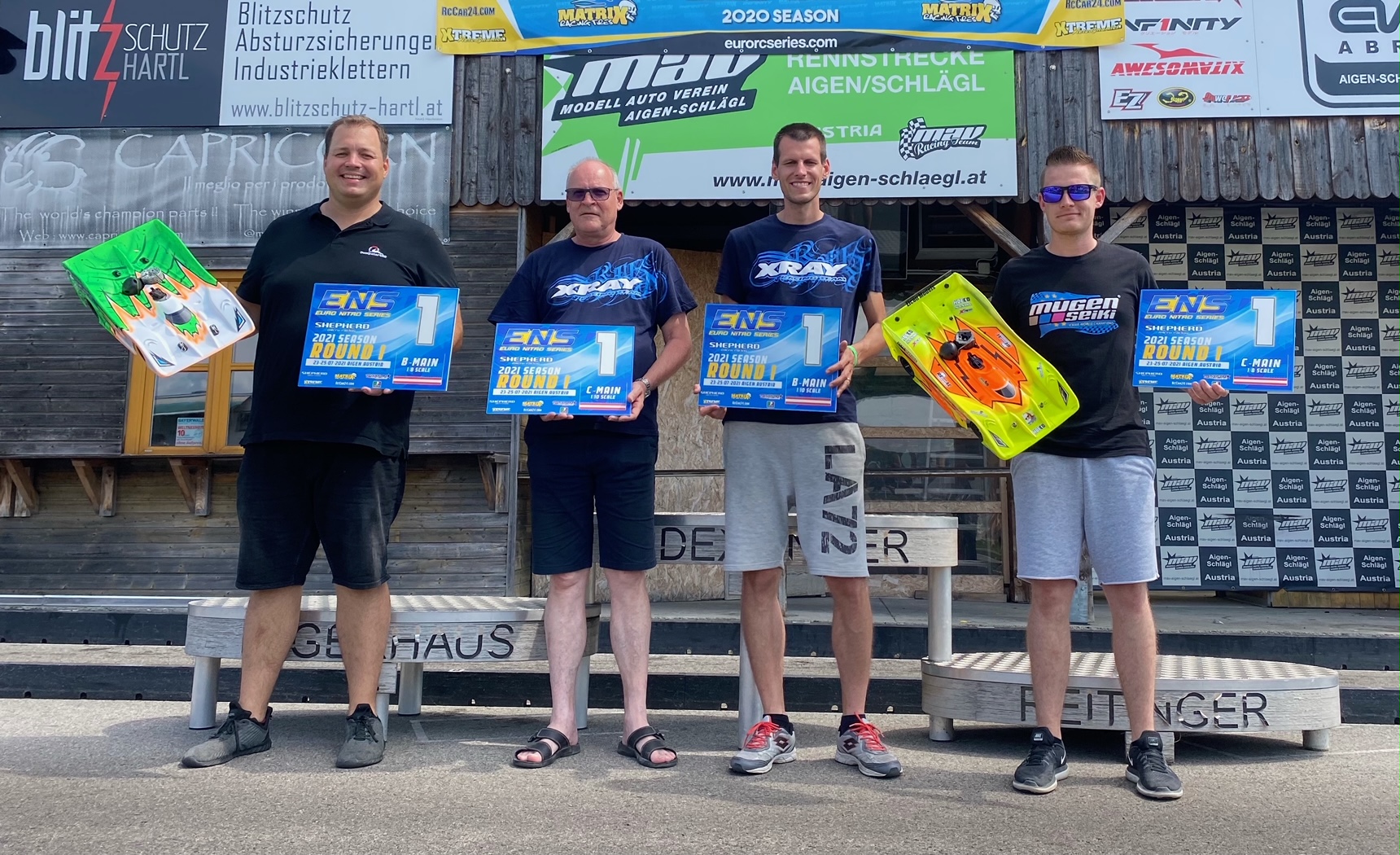 Whilst some of the first finals ran on Saturday evening, the main show took place on Sunday.  Some overnight rain did not dampen the spirits of the racers as the club had the track prepared and ready to race pretty much on schedule and the races took place under wonderful sunshine once again.

Simon Kurzbuch took home the overall win in the 1/8 Scale Class – the seventh year in a row he has won at the Austrian circuit.  Whilst he looked dominant in the very early part of the race, pulling out a three-quarter lap lead on second place before the first round of fuel stops, the Swiss driver was kept honest and whilst he kept his Shepherd out in front, any mistakes on the track or in the pit would have cost him.

The top eight qualifiers were joined by B Final bump-ups Steven Cypers (Belgium/Mugen) and Oliver Mach (Germany/Shepherd) for the 45 minute race.  The early fight was for second place between Merlin Depta (Germany/Serpent), Dominic Greiner (Germany/Capricorn), Toni Gruber (Germany/Shepherd) and Rick Vrielijnck (Netherlands/Infinity).  As the race cycled through, Dominic matched Simon’s strategy of changing two outside tyres at the ten minute mark, before a full change at twenty five minutes.  This dropped Dominic back, but with the fresher tyres he was later able to make up place and, by the time the others stopped for their one full tyre change at around twenty minutes, Dominic was up to second.  Toni Gruber had a smooth run through the pit stops and settled into third, whilst a flame-out for Merlin cost him some time.  Dominic remained on the lead lap, but never close enough to challenge for the lead.  Although this kept the pressure on, Simon made no mistakes on the track and his father was flawless in the pits as we have come to expect!  Toni had a somewhere lonely second half of the race in his run to third, whilst Rick also dropped back, and this allowed Lars Hoppe (Germany/Shepherd) and Tobias Hepp (Germany/Shepherd) to come through to take fourth and fifth respectively.

Groskamp pushed all the way in 1/10

Jilles Groskamp looked to have the 1/10 scale class under control as he led the field away.  The ten drivers, which included the B Final bump-ups of Julius Kolff and Christoph Rohrmoser, remained close in pace but it seemed like the Dutch driver had the measure of them all.  Strategy played a key role, as with only one mechanic tyre changes would take a lot of time and pose a lot of risks with a possible engine cut.

Groskamp played a relatively safe strategy, running around five minutes on fuel and taking one four tyre change on his Infinity around half way.  It was Shepherd boss Patrick Schäfer (Germany) who caught everyone’s attention – firstly by running five and a half minutes on fuel, meaning he would save at least one stop, but also as he took just two tyres at the twenty minute point.  With Jilles changing his tyres five minutes later, Patrick gained nearly a lap from the shorter stop.  The second half of the race then saw Jilles hunting down Patrick – the two generally matching lap times or Jilles only a tenth faster.  But as the race entered the final 7 minutes it was clear Patrick was struggling with his tyres.  Dropping pace by sometimes over half a second a lap, Jilles then caught him and passed him at the final fuel stop.  The drama continued to unfold as Melvin Diekmann (Germany/Capricorn), who was running in third but a lap behind, was now catching Patrick at up to one second per lap.  As the laps wound down, the gap closed and was at just under two seconds entering the final lap.  Patrick managed to hold on to second place, crossing the line just 0.3 ahead of Melvin.

However, the drama wasn’t over then, as in post-race inspection, Patrick’s car was found to be 10 grams underweight – so despite all his hard work he will just be credited with a tenth place finish.  This promoted Melvin into second and Milan Holthuis (Netherlands/Infinity) up to the podium after a hard fought race.  A special mention must go to Patrick Fanhauser, who drove a great race from eighth on the grid, keeping his car on track when others encountered problems and taking a popular fourth overall.

Salven in control in Masters

Michael Salven took command of the Masters final, showing the speed we had seen from the Dutch driver earlier in the weekend.  With Marco Kruse and Martin Zevenhoven joining the eight direct qualifiers from the B Final bump up, the thirty minute final kept the crowd entertained despite Salven’s dominance with his Serpent.

Remy Hasler, Torsten Müller, Arie Manten and Jürg Nydegger made the most of their top five qualifying positions to battle out for the remaining podium places.  Initially Remy held on to second, before Torsten took over and Remy dropped slightly back after the half way point.  Jürg was fighting with Arie for fourth place, which became third as Remy dropped back, but unfortunately ran into troubles in the final minutes and dropped to the back of the field.  This fixed the podium places, with Peter Thys having perhaps the best race as he moved from eighth on the grid to fourth at the finish.

With the racing rounded out by three great A Finals, the ENS crew wanted to thank the racers for their sportsmanship over the weekend and allowing a great celebration as the ENS returned, and to the host club in Aigen who provided a perfect facility once again for the series to get underway.