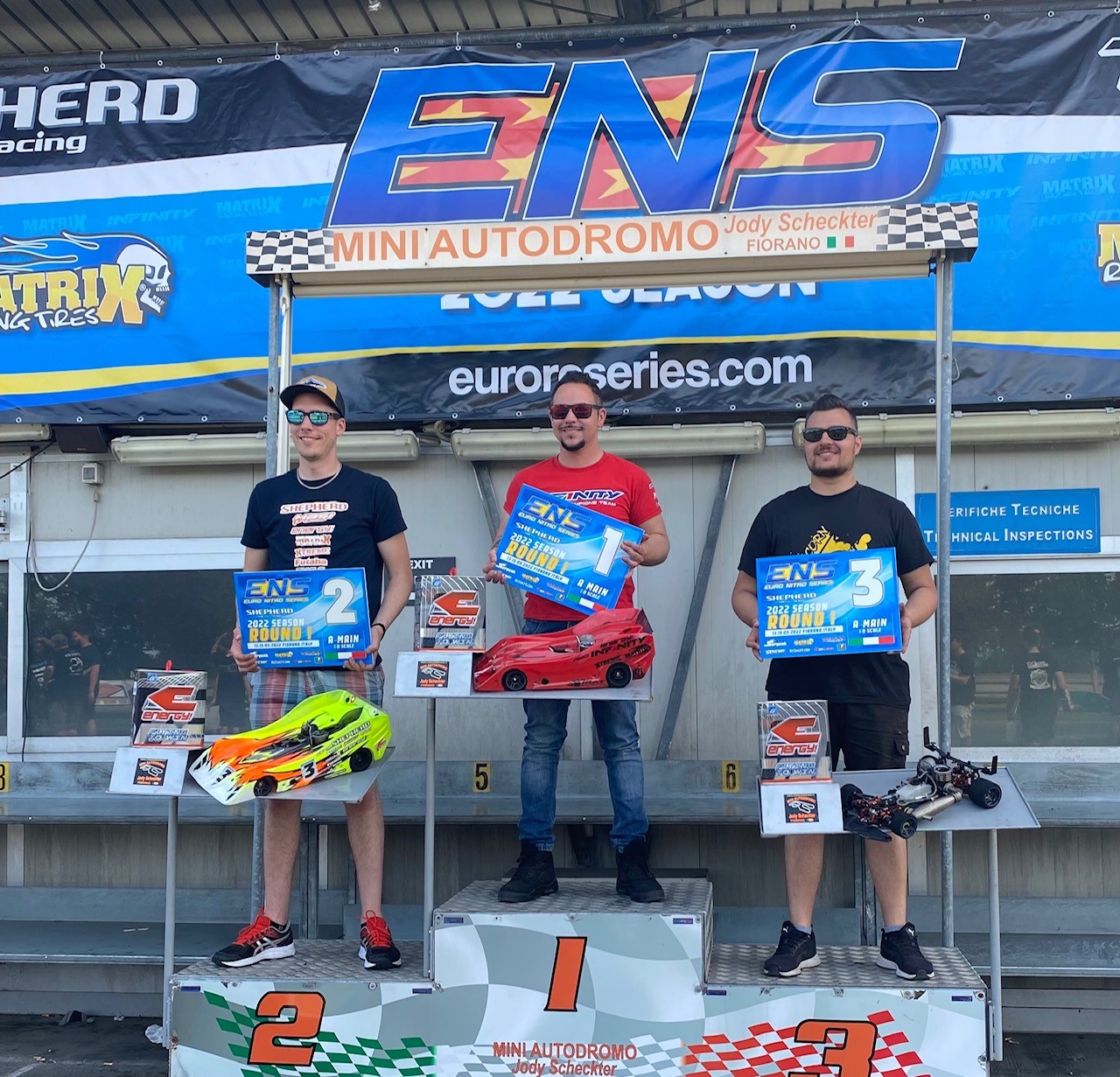 The finals took place under more wonderful sunshine in Fiorano today.  With the longer finals meaning fuel and tyre strategies would be a big factor, here’s how the races played out.

After securing pole position yesterday, Dario Balestri’s domination of this event concluded with the 45-minute long A Final on Sunday.  The Infinity driver led from the very start, save for two laps early on when Simon Kurzbuch ran longer than his Italian adversary before the first fuel stop.  Dario’s pace was so frantic that he ended up lapping the whole field!  Speaking to him after the race, he said:

Of course it maybe looks easy, but it’s never just easy.  It’s because of all the work we did that we had such a great speed.  I am really happy with my whole package and this year everything just works perfectly for me.  It’s very nice to have a win here, and I’ve very happy everything worked well.

Initially, Silvio Hachler ran in second place, but he was quickly passed by his fellow countryman, as Kurzbuch moved up to try to challenge the leader.  Running 30 seconds longer on each fuel stint than Balestri, the Kurzbuch also used a different tyre strategy – changing just outside tyres after 10 minutes, and then all four tyres later in the race.  Balestri meanwhile took four fresh Matrix tyres at the 15 and 30-minute marks.  Half way through, this looked like Kurzbuch might have a chance to challenge if the leader had any errors or pitstop issues, but there were none and Kurzbuch ended a lap down by the end.  Reflecting on the race, the Shepherd driver said:

I think this was the maximum possible today.  Congratulations to Dario for the win, he had really great speed and we know we need to work hard to try to improve for the next race.  I hope that we can find some more pace over the next few weeks and have a good race with Dario in Ettlingen next month.

The big mover of the race was Mirko Salemi, who went from eighth on the grid to finish on the podium in third.  Clearly very happy with the result, his first visit to the podium at an ENS event, the Capricorn driver had a hard fight in the second half of the race with Hachler, exchanging positions as the pit stops cycled through but holding on to the third place by one and a half seconds at the flag.

First ever ENS victory for Diekmann

Melvin Diekmann became the tenth winner in ENS history of the 1/10 Scale Class with an emotional victory in Italy.  From the start, pole sitter Jilles Groskamp led the field, pushed hard by his team-mate Francesco Tironi, with Teemu Leino getting past Diekmann early on.  But it was a race where all the top runners experienced issues of some sort.  Groskamp and Tironi touched as they fought for the lead, with the Italian coming off worst.  Despite a recovery to third, Tironi later had further issues which relegated him to a tenth place finish.  Diekmann had two flame-outs in the pit stops and an incident with a backmarker actually allowed Groskamp to re-take the lead as the two battled on track.  But he kept his composure and took the victory to huge applause from his pit crew, family, team mates and friends.

It’s been difficult with no major races for 11 months or something.  But to get back to racing now with a win is really great.  Today, my car was better than yesterday in qualifying, and I’m super happy to finally have a win at ENS.

Groskamp had to settle for the runner-up position.  The pole sitter clearly didn’t have the same confidence in the car as in yesterday’s qualifying.  Taking just right-side tyres at the one-third distance (compared to Diekmann taking a four tyre change around half way), the Dutch driver had battles with team mates Tironi and Leino at various stages of the race, but in the second half it was clear the fight for the win would be with Diekmann.  At a bit of a loss to explain his result, the Infinity driver said

I think I had the fastest car in practice and in qualifying, but today Melvin was quicker.  Maybe the track was hotter or there was more wind which didn’t suit my car, but the rear was sliding a lot more than before.  Well done to Melvin for his first win, but now for the next race I’ll learn from this and hope to come back stronger again.

Leino rounded out the podium, with a fairly lonely second half to the race as he dropped back from the lead battle.  The Finnish driver, who has been unable to travel to the ENS races over the last two years due to the COVID travel rules, finished up ahead of the all-French battle between Quentin Leroux and Brico Turco, Leroux taking fourth as Turco had a great race and seemed very competitive in the final despite qualifying in eighth place.

As always, the Masters class created great racing for the 30-minute final.  Jonatan Marchetti led the field from pole, but a multi-car accident after only a few minutes slowed him, and also took out contenders Angelo Fagnani and Stefano Solaroli.  Former series champion Arie Manten took his turn at the front, but a flame out cost him chance of victory as he had to be recovered to the pits by a marshall, putting him a lap down.  Manten made back a lot of time, closing on Nydegger, who had inherited the lead after Manten’s issue, but came up short.  Manten’s hard work was then un-done as in technical inspection, his fuel take was found to be too big, dropping him to last in the classification.  Nydegger took the win, as Marchetti recovered to third (later promoted to second), and Lars Haugen took the final step on the podium.

Germany up next for Rd 2

With the races now completed in Fiorano, everyone is heading home and their attention will already be turning to the next event.  Also a race that couldn’t take place in 2020 or 2021, we’re excited to get back to Ettlingen in Germany for the second race in the ENS 2022 championship.  Taking place in only one month’s time, entries are already open for the race at MyRCM now!