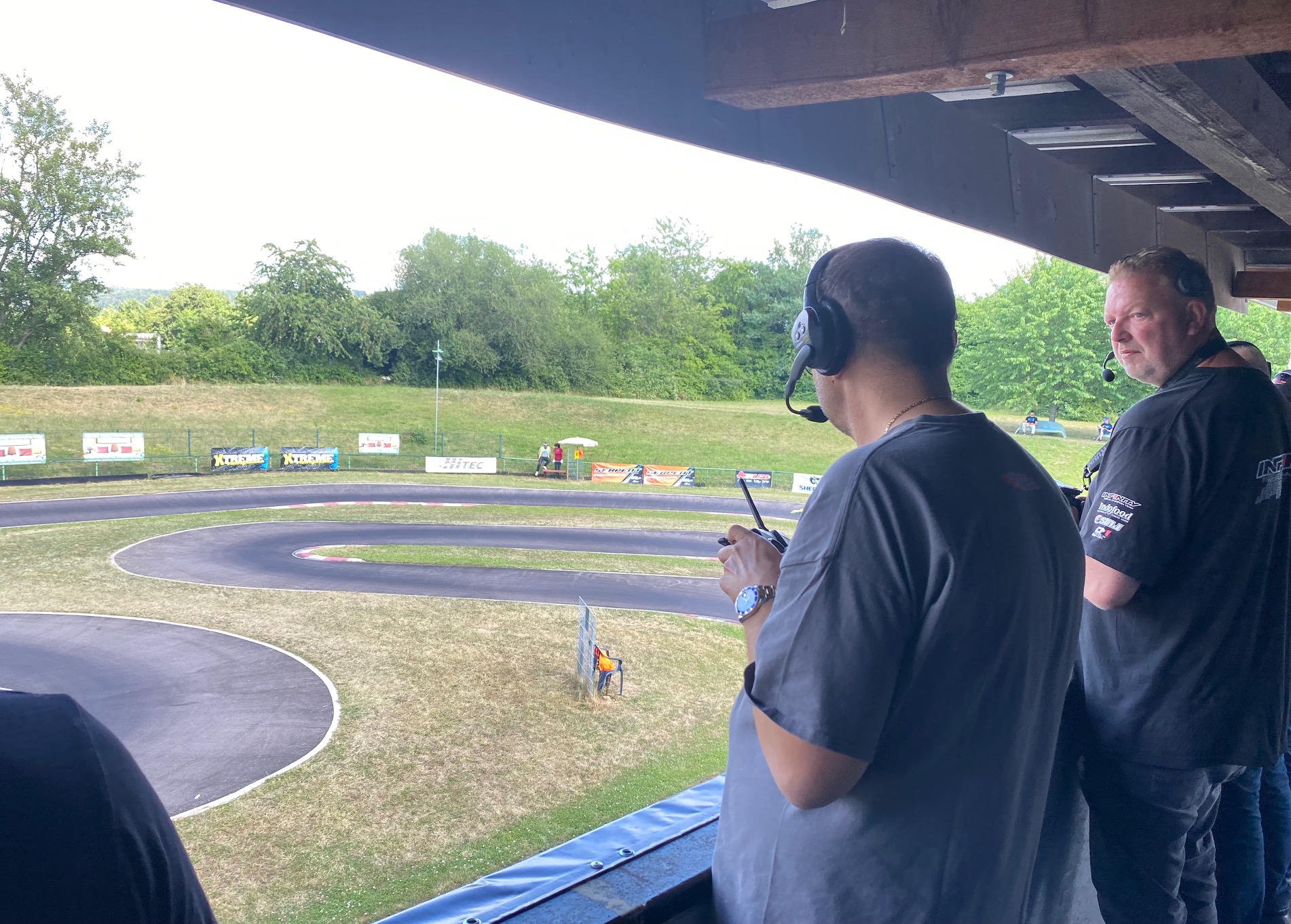 With Saturday’s action taking place under perfect weather conditions, it allowed drivers to really push their cars and driving skills to the limits.  With all the classes so close, everyone tried to get the best result, which led to some mistakes and problems for a number of drivers – that has meant some interesting line ups for the finals!

Kurzbuch in control in Ettlingen

Simon Kurzbuch ended the day at the top of the tree in the 1/8 Scale class and will start from Pole Position in tomorrow’s final.  The Shepherd driver didn’t have it all his way though, with a mistake in the first round just two laps from the end, allowing Dominic Greiner (who had been trailing Kurzbuch by a few tenths of a second throughout the run) to take the Q1 win. Lars Hoppe could hold up Shepherd’s honour in second place after a close fight between him, Toni Gruber (3rd in round) and Rick Vrielijnck (5th).  Thilo Diekmann set a great time in the B heat to take fourth in the opening qualifier.

Q2 saw Kurzbuch back on top, one-tenth ahead of Greiner’s Capricorn, with Oliver Krahemann taking third with his ARC.  Kurzbuch led Greiner again in Q3, with Vrielijnck up to third ahead of Hoppe.  Kurzbuch secured TQ in the last round, again with the fastest time over Greiner and Vrielijnck, with Leo Arnold taking his Xray to fourth in the round to lock himself into the A-Final.

Speaking to Kurzbuch after the race, he was already thinking about the final:

The car was good, the engine was good.  I made a mistake in the first qualification, but after that the other qualifiers went very well.  The tyre wear is quite high here so we need to check that for the final, and also the fuel consumption is high too – so there will be a lot of work for the pit crew for sure!

With Melvin Diekmann having to skip Saturday’s action to do his final presentation for his Bachelors, it left the door open for the Infinity team to take control of the class.  After setting the best time in last night’s Q1, Jilles Groskamp continued at the front again on Saturday and set the best time in every round.  Q2 saw Groskamp’s team mates, Teemu Leino and Milan Holthuis exchanging second and third during the four-minute race, but Teemu ran out of fuel two laps from the end, with Milan running out on the final lap.  That allowed Dennis Weihert to take a somewhat unexpected second in the round, with Dirk Wischnewski (who had been also in the mix with Leino and Holthuis in the early part of the run) in third, as Holthuis was able to coast over the line to take fourth.  Groskamp stayed in the lead in Q3, as again Leino and Holthuis fought over second – this time Holthuis came off better and made it a Dutch 1-2, finishing ahead of his Finnish team mate with Wischnewski in fourth.  Groskamp completed the clean sweep in Q4, Holthuis was again second, Wischnewski third and great performances for Patrick Fanhauser and Christoph Rohrmoser saw them fourth and fifth in the round respectively, moving them to fifth and sixth overall. Leino stripped a gear before the start, so ended up having to count his Q2 score when he ran out of fuel, meaning he will start deep in the grid in the final.

Groskamp explained afterwards that he too was already thinking about the finals:

After I secured TQ in the third round, I used the same tyres again in Q4 so I can get a check on the wear rate.  It’s a shame Melvin wasn’t here today as I’m sure he would have also been part of the fight, but I’m really pleased to see Milan doing so well and Teemu has been fast too, just some bad luck.  I’m confident for the final – tyre wear will make it an interesting strategy decision.

The +40 Masters class was again close throughout all four rounds.  In Q1, Torsten Muller took a narrow win from Luca Martinelli, whilst in Q2, Michael Salven led initially before dropping back in the last minute, allowing Lars Haugen to take the win, Martinelli again second and Salven in third.  Muller led the beginning of Q3, but Haugen fought back in the second half to take another win, with Muller in second and Martinelli third – Daniel Toennessen had been in that fight but crossed the line in fourth after four minutes.  The final round was the closest, with Haugen and Muller battling to take the TQ.  Both encountered traffic on the closing laps which let Toennessen close in.  Haugen took the win by just one tenth of a second, with Toennessen in second and Muller in third.  Arie Manten didn’t have a great day, but rounded it off with a fourth place in Q4 from the B-Heat.

As I told you yesterday and expected, it was super close in qualifying.  I made a mistake in Q1 which cost me time and made it a bit stressful from there, but every round was super close so it’s great to be TQ.

Everyone now is taking a well deserved cold drink and dinner, as they get ready for tomorrow’s action in the finals.  As always at the ENS, everyone gets at least a 20-minute final, with the A Finals being 30 minutes for Masters, and 45 minutes for 1/10 Scale and 1/8 Scale.