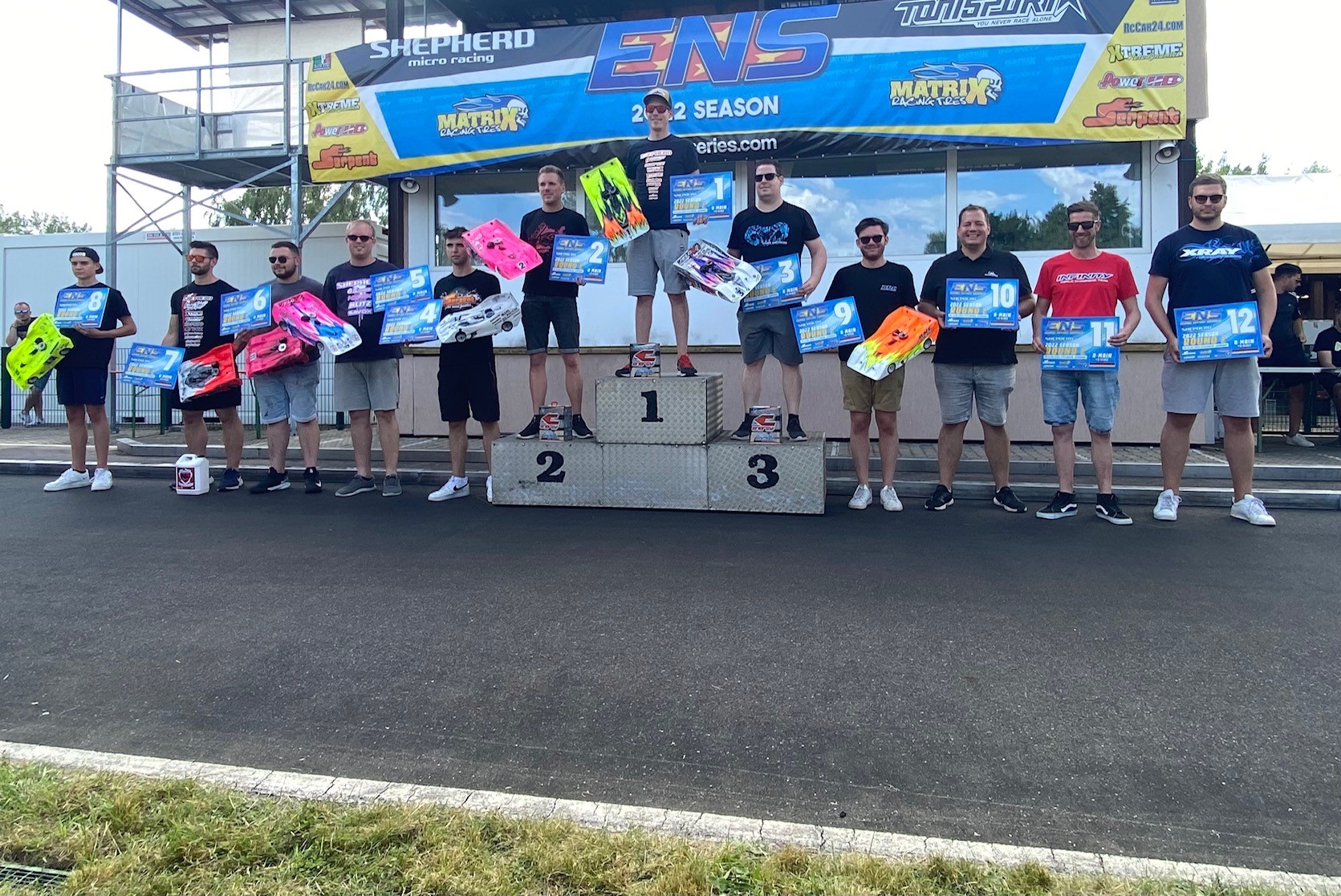 With temperatures hitting 30 degrees in Ettlingen, but also some occasional cloud cover and wind, drivers had some different conditions to manage in the finals.  But with close times in qualifying, we already knew the finals would be interesting anyway!

The 1/8 Scale A-Final saw a very close race between pole sitter Simon Kuzbuch, and second-place starter Dominic Greiner.  The two were very closely matched on their laptimes throughout the 45-minute race, and regularly traded places as fuel and tyre stops cycled through.  Greiner was able to run slightly longer on fuel, which would save him a stop over the whole race distance – but his pace on track meant it wouldn’t just be decided by strategy.  After the second fuel stop, Greiner emerged in the lead, but exiting the pits following the third stop, the German made a small mistake, allowing Simon to re-take the lead.

Greiner was able to turn slightly quicker lap times, and so the position trading continued.  Both drivers took two, four-tyre stops at around the 15-minute and 30-minute points of the race. After Greiner’s second tyre change, he ran out of fuel on his way back to the pits on the following stint, and had to be carried back to the pit-lane, costing him around 8 seconds.  He remained in the hunt still, until an un-forced error saw him roll the car with eight minutes remaining in the race.  This gave Kurzbuch a lead of around one lap, from there he was able to cruise home to the win.

A dejected Greiner spoke to us after the race:

It was a stupid mistake from me.  We also ran out of fuel one time, nothing was wrong but maybe because I was on new tyres and also pushing so hard.  Without this we could have won the race.  I knew from the practice the car was good, but when I pushed 100% or even more, the car was tricky to drive.  The strategy was right, as we would save one stop over Simon, but we were on the limit the whole time.

Kurzbuch reflected on the race, acknowledging he still needed everything to go right for him to be able to take the win:

It was a very difficult race, it was super hot and very stressful.  Dominic was very fast and we could only win with a perfect job from the whole team.  My team’s pit stops were perfect and I think a little bit faster than Dominic.  We didn’t have the pace of Dominic, but I’m of course very happy we could win and kept the car on the track.

The TQ and Win in Ettlingen moves Kurbuch to the championship lead, as Greiner, a previous 1/10 Scale World Champion, firmly establishes himself as a strong contender in the 1/8 Scale class too.

Behind the top two, Lars Hoppe had a solid run to third, often matching the pace of the leading pair but not quite able to challenge for higher than second place.  Jonathan Gandin had a good race to move from seventh on the grid up to fourth, with Timo Schroder going from tenth to fifth, and just five seconds behind Gandin at the finish.  Enzo Battistini, who bumped up from the B-Final, took sixth overall in his first ENS A Final appearance.

With Melvin Diekmann unable to attend Saturday’s qualifying rounds due to the final presentation of his Bachelor’s, the Fiorano winner started at the back of the C Final.  He duly bumped up into the B Final, and also secured the win there to book himself a spot in the A Final.  Even starting 11th on the grid, the front runners spoke before the race and expected him to be able to challenge for a podium position.

Jilles Groskamp led the field away, with his team-mate Milan Holthuis in hot pursuit and putting the pressure on from lap 1.  Behind, Teemu Leino was able to move up from seventh on the grid to fight with Dirk Wschnewski who had started third, and the Finnish driver moved past the German after around three minutes whilst Diekmann was up to fifth by this point.

Holthuis’s team managed a quicker first pit stop than Groskamp’s, which moved the younger Dutch driver ahead of his senior team mate as Diekmann’s pit crew also helped their driver up to third and very much in touch with the leading Infinity pair.  Sadly, Holthuis’s quest to join the ENS winners list came undone as he ran out of fuel on the way in for his second stop, leaving the lead to be a battle between Groskamp and Diekmann.  It was clear to see that Diekmann had the faster car now, highlighted by him passing Groskamp on track and opening up a lead.  Diekmann was also running a more aggressive strategy, choosing to make two full four-tyre stops, whilst Groskamp opted for just a single four-tyre change around half way.

But it was not to be a fairytale last-to-first result for Diekmann, as he twice suffered a flame-out following a pit stop, costing him valuable time that, despite him continuing to lap faster than Groskamp, he was ultimately not able to recover from.  Groskamp still had to keep his car on track, which he did so and came close to matching Diekmann’s lap times – showing he might have more speed if it was needed.

Clearly upset not to be able to take the win today, Diekmann struggled to find words when we spoke to him:

What can I say.  Two times we had a flame out after the tyre changes, and we don’t really know why – the fuel was full both times.  I had great speed, we changed tyres twice and Jilles only once, so we knew we had to push to catch Jilles too.  Overall, the car was really good, and it’s driven like 100 minutes today [the three finals plus warm-up time], no real wear or damage which shows how good the Capricorn is right now.  I think in Aigen [the next round] we have a good chance to beat Jilles, so we’ll just look to the next race.

Jilles once again showed his experience when he explained his view of the race to us:

It was not an easy final as the car didn’t feel the same as in qualifying and more difficult to drive.  I knew with my strategy I had to be easy on my tyres – I saw immediately Milan had good speed so I focussed on my own race.  I am not happy with my pace but very happy of course to take the win.  It’s clear Melvin and Milan are up-and-coming winners; I don’t think I’m a slower driver but I usually choose a safe strategy and engine setting for the finals – maybe I need to change this as if they get a clean race they will beat that approach.  I’m already planning to try something different in the car in Aigen, where it’s normally very good anyway.

Behind the top two, Leino also hit issues early on and like Holthuis dropped back, giving Wischnewski a rather lonely race to third place, around a lap behind the leaders but a lap clear of fourth place.  Holthuis raced back up to fourth place by the finish, beating out Patrick Fankhauser (returning to the ENS at this event following the birth of his first child), who in turn held off Leino’s charge back up the field, and Christoph Rohrmoser had a solid drive to take seventh.

After Jurg Nydegger added his name to the list of ENS Masters winners, another name has now joined that same group, with Daniel Toennessen taking victory in Ettlingen.

After leading away from pole, for a large part of the race, it seemed like it may be Lars Haugen who would be the seventh winner of the class, part of the ENS since the 2018 season.  Haugen led the first half of the race, with Torsten Muller in second and Luca Martinelli in third, until issues for Martinelli at the half way point took him out of contention.

Toennessen was now in the mix as well and a few mistakes from Haugen saw Toennessen taking the lead.  Haugen kept the pressure on, with Muller close by but dropping to around a lap behind as the pit stops cycled through.  Helped by setting the fastest lap of the race in the latter stages, Toennessen crossed the line to take victory and huge cheers from the crowd.

Aigen the venue in July

The end of the races in Ettlingen marked the half way point in the championship, and with a different winner at each track in all classes, Round 3 of the famous series will start to give us an idea of who the contenders really will be.  The MAV Aigen-Schlägl club in Austria is well-known amongst ENS racers, with it hosting the ENS eight times so far.  Entries for the event can be made on MyRCM now – we’ll see you all there!