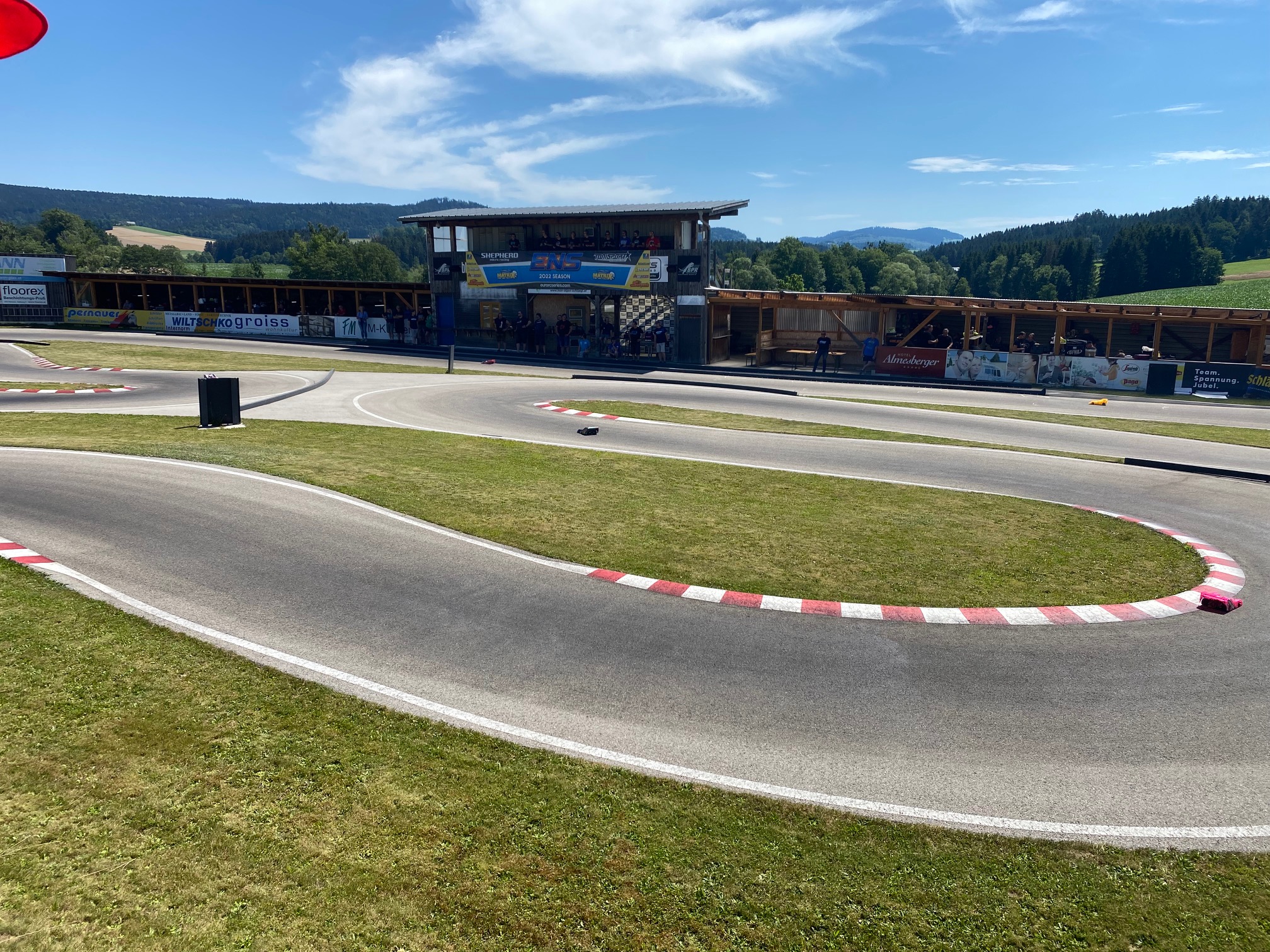 The Euro Nitro Series heads back to the MAV Aigen Schlägl track in Upper Austria this weekend.  The track will host its ninth ENS event, being part of the calendar of the famous series every season except the very first ‘Pilot Season’ in 2013.  The track continues to be popular with the ENS family, with the host club continually searching for improvements to their facility each and every year.

Throughout the eight years so far, the covered pit area has been doubled in size, a second kitchen added, and the track fully resurfaced.  This year, the focus moves to the food and drink side again, with a large marquee being brought in to provide more under-cover eating and relaxing space for the drivers. And that extra shade is going to be needed – sunny weather is being forecast for the weekend.

The track is located in the hills of northern Austria, and around 10km from both the German and Czech borders.  With views from the track of rolling hills and even occasionally snow-topped mountains, it is a ‘picture-postcard’ setting – a rather surprising place to find an RC track!

The Austrian hospitality of the local towns and villages extends to the track itself, with two canteen areas serving home-cooked meals (a mixture of both traditional Austrian foods and more international options), as well as drinks and snacks.

The permanent pit area has space for well over 100 drivers, and with this year’s ENS looking at being the best-attended at the venue, drivers and mechanics will make full use of all the space available.

With the venue being situated on a hillside, the track features a lot of elevation change.  Most obvious is the main straight, which angles up-hill at around 5 degrees, whilst many of the corners or braking zones also have an uphill, downhill or cambered element.  This makes attacking the corners difficult, as well as requiring a careful setting of the clutch and brakes.

The layout itself is unchanged since the track was built in 2006, and features a fast sweeper after the straight, leading into a twisty first infield section.  After this, the track opens up a little on the left side with some switchback corners offering good overtaking opportunities.

When the track was re-surfaced in 2017, the kerbs were also re-designed and made out of the same asphalt of the track.  This makes them have a lot of grip, but the size still means drivers need to take care – especially in the 1/10 Scale Class.  Experience at this track counts – knowing which corners can be driven tighter is a chance to improve laptimes. But being too aggressive at the wrong point can easily lead to the car flipping!

The undisputed king of Aigen is Simon Kurzbuch – the Swiss driver taking the win here in the 1/8 Scale Class every year from 2015 onwards.  Although the track is perhaps on the smaller side for 1/8 Scale, seeing the likes of Kurzbuch and his other ENS contenders wrestle their cars around this track is a wonderful sight!  In 1/10 Scale, Teemu Leino has notched up three victories in the Austrian hills. The Finnish drivers will be hoping to get his championship back on track after a difficult first half of the season!  Alongside him, Jilles Groskamp has two wins, including taking the top step here last year.  But as we know, both will need to watch out for Melvin Deikmann this year – the German driver also has a good record in Austria, having finished on the podium the last three years.