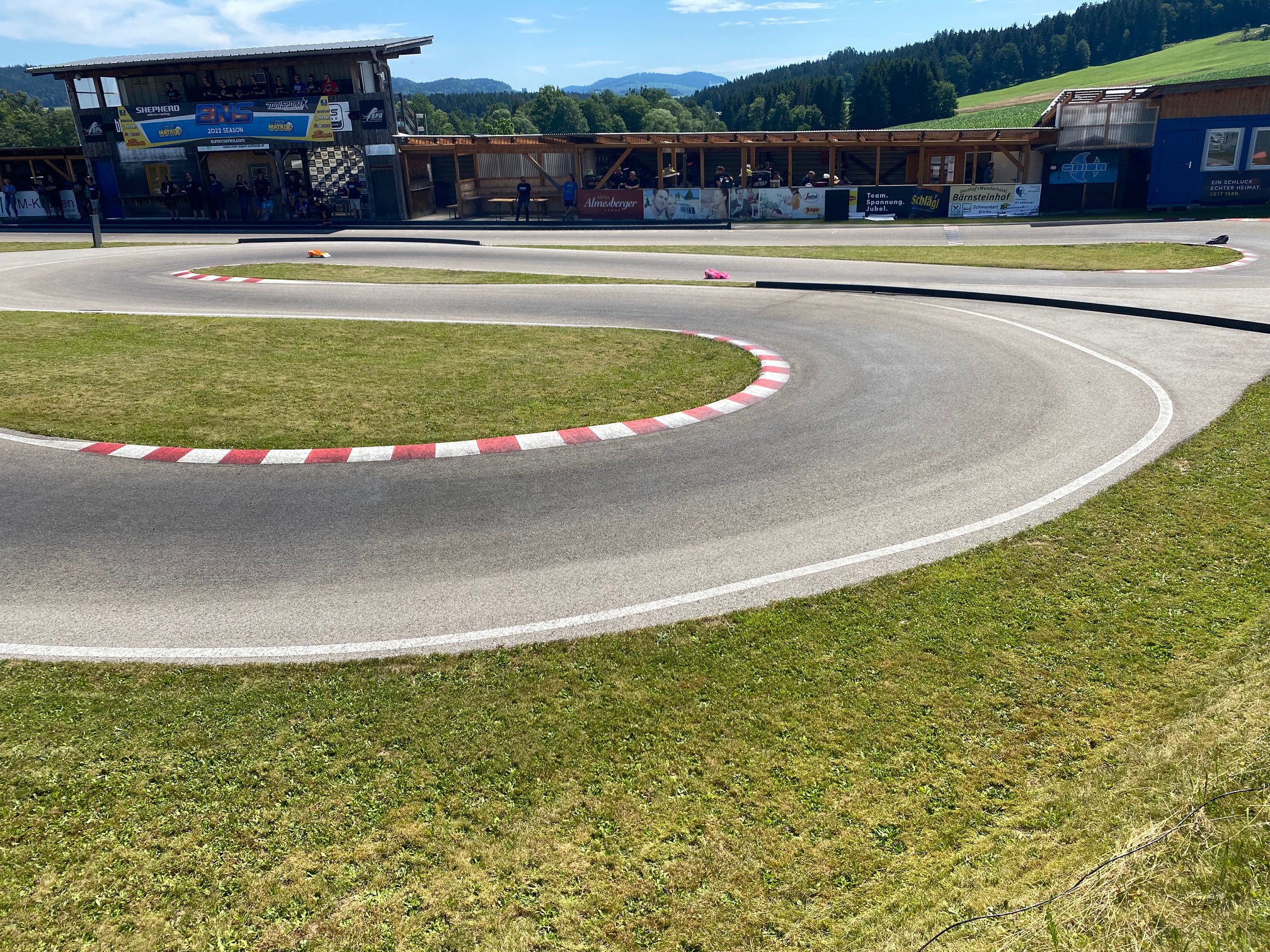 Friday’s action in Austria took place under perfect conditions.  With Thursday seeing temperatures hit 30 degrees, today was a little cooler but still with sunny skies throughout.  This meant everyone had plenty of opportunity to tune their driving and car setup, and set their fastest three laps in the Controlled Practice sessions.

Kurzbuch ahead – but only just!

Simon Kurzbuch is on a quest for his eighth successive victory at the Aigen circuit, and put himself on the right path with the fastest time in Controlled Practice.  The Shepherd driver led the Free Practice sessions too, but had close company in the evening’s Controlled Practice.

Kurzbuch ended the day just one-tenth of a second ahead of the driver he fought for victory last month in Ettlingen, Capricorn’s Dominic Greiner.  Toni Gruber also kept himself in the mix with his Shepherd, setting a nearly identical time to Greiner over the best three laps.

Diekmann is Top Seed in Austria

Melvin Diekmann is the man who will carry the number one sticker on his car through the qualifying rounds in Austria.  The Capricorn driver was only fifth fastest in the first of the two Controlled Practice rounds, but jumped to the top in the slightly cooler conditions of CP2.  His championship rival, Jilles Groskamp, took the second best time, one-and-a-half tenths of a second behind.  The Infinity pilot started a little on the back foot, only arriving late on Thursday afternoon for the last round of the Free Practice day after spending the week in Italy to test for the 1/10 electric World Championships.

Groskamp therefore relied on the work of his team-mates, and their own efforts were well rewarded as Milan Holthuis and Teemu Leino were within one-tenth of a second of Groskamp’s three-lap time.  Quentin Leroux will be one person to watch, showing a lot of speed through the Free Practice rounds and ending the day with the fifth seed position.

We say it every time – the Masters class normally produces the closest racing, and Friday in Aigen was no different!  In the end, it was Roy Bakker who put together the best three laps, with a gap of less then one-tenth of a second to Remy Hasler, who in turn was about six-hundredths of a second ahead of Arie Manten!  It can’t be much closer than that, so qualifying is going to be really interesting again in the Masters division!

With all the practice now concluded, Saturday is when things start to get even more important, as the four rounds of qualifying are on the schedule.  With similar weather conditions to today forecast, it looks like a great day of action is on the cards as everyone will fight for the best starting spots in the finals.  If we look at how close Practice was in every class, everything seems to be possible!