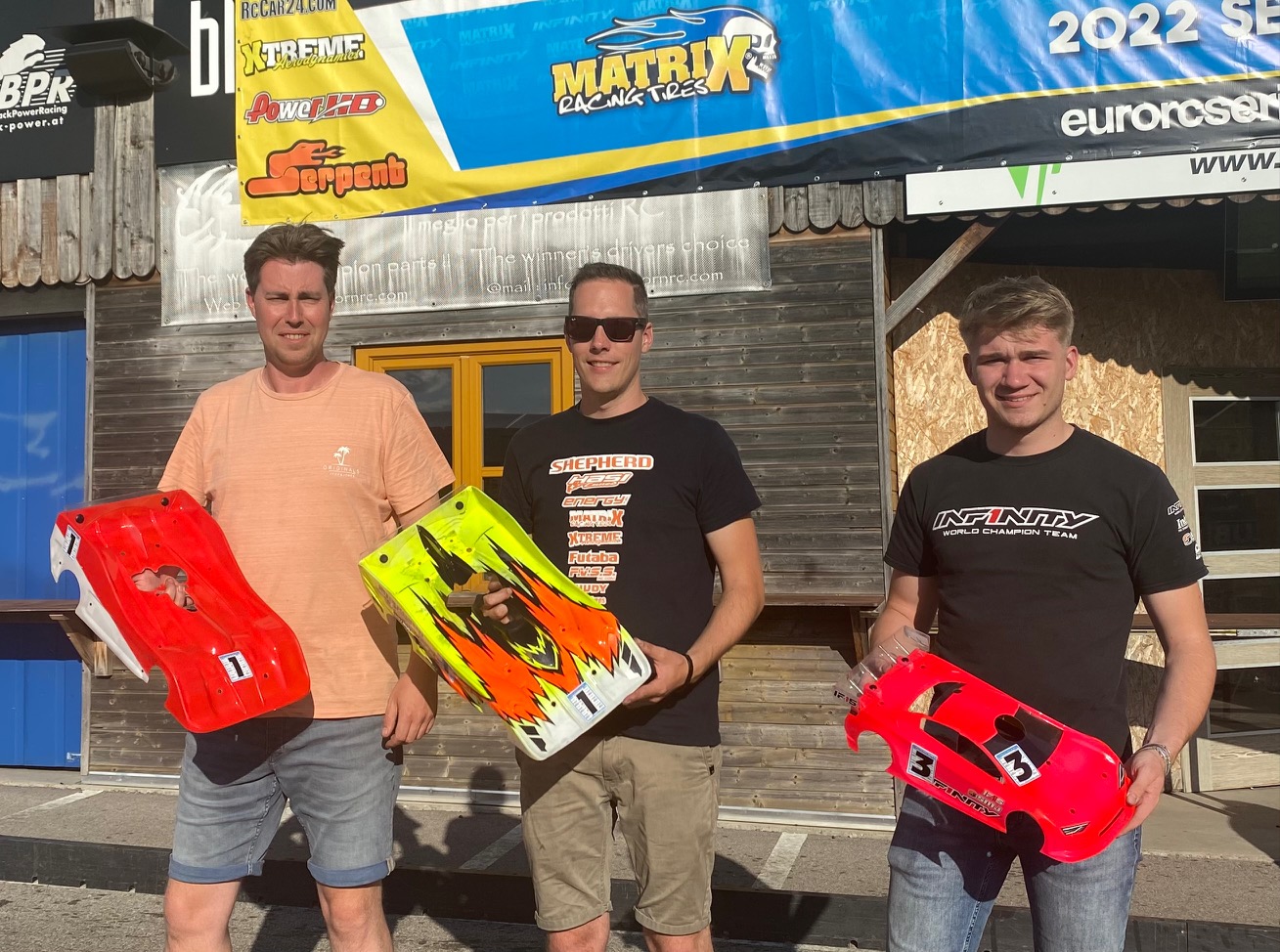 A busy day in Austria saw all four rounds of Qualifying completed.  Whilst the sun remained shining all day, the drivers faced a new challenge with more windy conditions than they had experienced on either Thursday or Friday’s practice rounds.  This may have added to the close times we usually see in ENS Qualifying, as drivers fought for every tenth of a second.

Simon Kurzbuch continues to rule in Aigen as he wrapped up yet another pole position at the Austrian track.  Setting the best time in the opening two rounds, he was prevented from a perfect day after engine troubles in Q3 allowed his now-apparent Championship rival, Dominic Greiner, to keep the pressure on as he set the fastest time.  But the Shepherd driver rebounded in the final qualifier to wrap up the TQ position.

Speaking to us after Q4, Kurzbuch explained:

It’s always close with Dominic – I hope it was exciting for the spectators!  But of course I am very happy to start at the front, and very happy again with my car and engine.  You can see how quick Dominic is when he made the best time in the third round as we got my engine setting wrong then.  It’s an important championship point too, but we are focussed on tomorrow’s final and now need to think of our strategy.

Greiner backed up his Q3 fastest time with the second best time in the remaining three rounds to start second on the grid.  The Capricorn driver joked with us:

That’s pretty good!  I’m very happy to be second and this close to Simon on “his track”!

Behind, Kurzbuch’s Shepherd team-mate kept himself in the mix, finishing second in Q3 and third in all the other rounds, whilst the surprise of qualifying was Thilo Diekmann.  The Capricorn driver, perhaps better known for his many years of 1/10 Scale racing, is now mostly focusing on 1/8 Scale from now on.  Consistent runs will see him starting fourth on the grid for the 45-minute final.

Dutch star Milan Holthuis staged a major upset in Austria, beating out his more senior team mates and the other championship contenders to take his first ever pole position start in the popular series.  However, it wasn’t entirely straight forward – either on or off the track!  The Infinity driver set the best time in Q1, but in post-race inspection his time was deleted after his fuel failed to pass the normal 16EU Nitromax test.  After an appeal, the fuel was re-tested on both the main and back-up test tool, both of which passed with no issues.

The time was then re-instated, keeping Holthuis in the fight for his first overall TQ.  Infinity’s Teemu Leino set the best time in Q2, before Holthuis was back on top in Q3, setting up a last-round shootout.  It was then the Capricorn of Melvin Diekmann who put in his best time to top the final qualifier, which in turn secured Holthuis the pole position.  Diekmann took second in Q3, and will start second on the grid, whilst Leino’s next best result was a third, putting him third overall.

Holthuis reflected on qualifying by saying:

It was really tricky with changing track conditions and the wind today.  My car was really good, and to have my first overall ENS TQ is really great!  The Final will be interesting – there’s quite high tyre wear, especially on the right-side, so we’ll need to think carefully what we do.

The current championship leader, Jilles Groskamp, has the opportunity to wrap up the title this weekend.  Groskamp remained on the pace throughout Saturday, setting three second-place runs – but with three drivers taking a TQ, this will only see him start fourth.

Bakker remains in charge in Masters

Dutch driver Roy Bakker continues his spell at the top of the Masters class in Austria.  After putting in the best time in Practice, Bakker faced four tough qualifying rounds.  Q1 went to Remy Hasler, ahead of Bakker and Franz Engel.  The second qualifier then had Bakker at the top, leading Alex Piperato and Hasler pushed to third.  Hasler then moved back to the lead in the third round, with Arie Manten (who had had a disastrous first two rounds) second and Piperato third.  Bakker locked up pole position by winning the last round, ahead of Manten and Hasler.

Bakker seemed a little overwhelmed when being interviewed at the end of the day, and told us:

It’s perfect!  My car and engine were perfect.  I’m using the car with the standard kit setup, which just seems to work for me.  I need to thank Tim Bossman for all his work as the best mechanic!  I’m expecting the others starting behind me to be fast especially at the start of the final, but I just aim to be consistent  and think this will be the key.