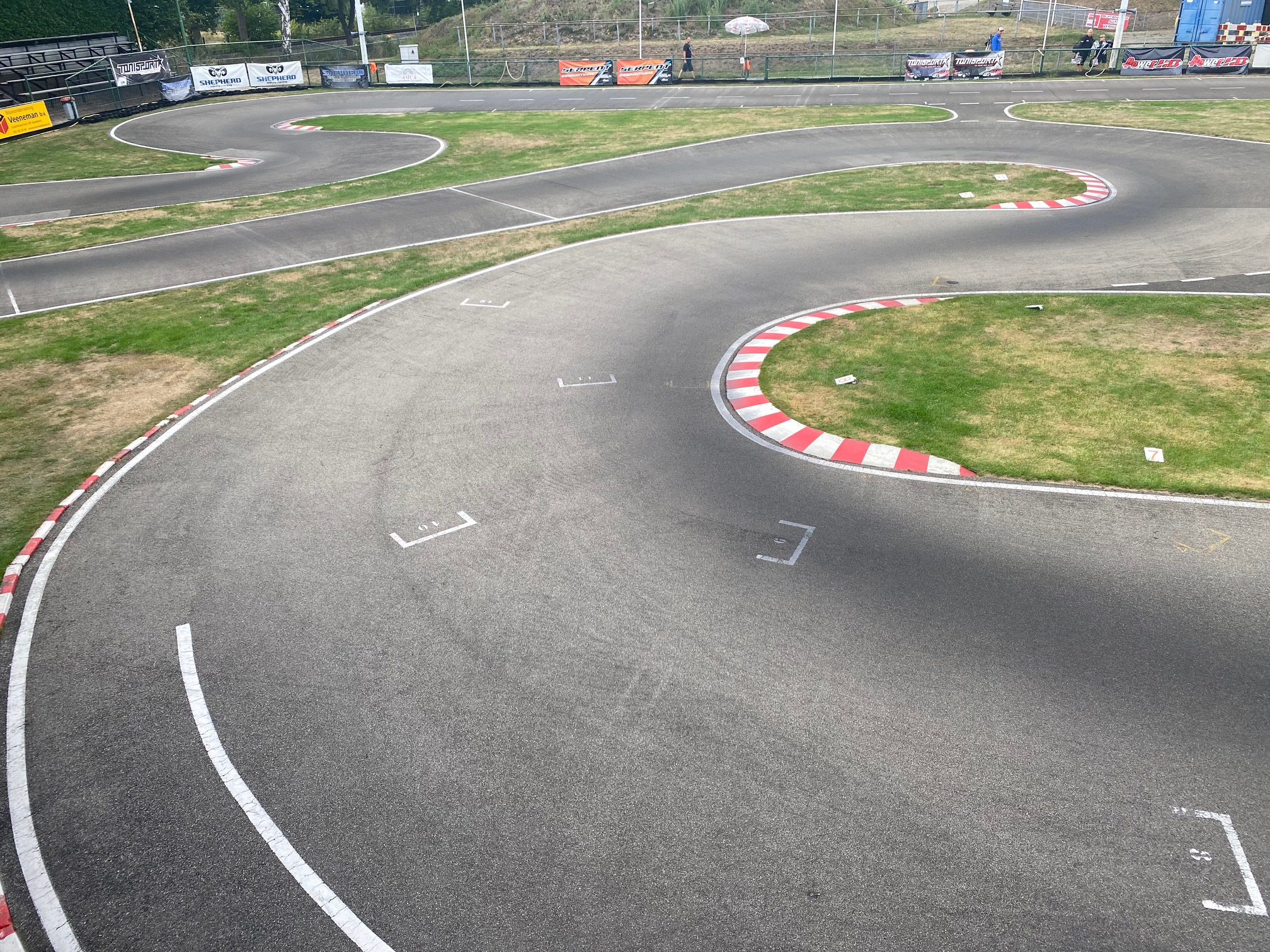 Finals all set for Sunday’s deciders

With qualifying complete, the grids are now set for the finals on Sunday afternoon.  With the championship still undecided in 1/8 Scale and +40 Masters, the grid positions are very important for the drivers who want to lift the overall titles.

Toni Gruber took the overall TQ in the 1/8 Scale class after setting the best time in the final round showdown.  With the TQ position awarding an extra championship point, Gruber’s result is a boost for his Shepherd team-mate Simon Kurzbuch’s title chances too.  Gruber, looking calm as ever in the pits when we spoke to him at the end of the day, told us:

It was really really good!  The car and in fact the complete package worked great all day.  I saw this morning after Simon’s issues in Q2 that I had a chance at the TQ, but it was going to be close.  We tried some small changes for Q3 but they didn’t help, so we went back again for Q4 and the car was amazing in the second half of the race especially, so that is positive for the long final.

Simon Kurzbuch had set the pace in Friday evening’s Q1 round, before a messy Q2 saw a number of drivers struggle with traffic, which allowed Gruber to the top.  Simon was back at the top in Q3 to secure second on the grid.  His title rival, Dominic Greiner, will start third for Capricorn, although the qualifying result simplifies the maths now.  For Greiner to take the title, he must win the final; anything less and Kurzbuch will be champion.  Aside from the attention on the top three, Lars Hoppe secured fourth on the grid , helped by third in Q2, with Steven Cuypers and Timo Schroder rounding out the top six after tying on points at the end of four tough qualifying rounds.

Champion-elect Jilles Groskamp took his Infinity to the fastest time in all four rounds of qualifying at the ENS finale.  Clearly the class of the field so far this weekend, the Dutch driver is looking to cap off his season with a win in tomorrow’s 45-minute long final:

Everything worked really well, the car had good steering and rotation and I didn’t have to push too much.  With the TQ secured early, in the last round I tested smaller tyres and the weight adjustments I expected to run in the final, and still the car was great and I could take the fastest time in the round.  Also having Milan and Teemu behind me shows how well our car is working right now!

Behind Groskamp, his Infinity team mates provided the strongest challenge – Milan Holthuis took second in Q1 and Q2 to secure second overall on the grid, with Teemu Leino set to start from third after he was second fastest in Q3.  Tim Benson showed improvement in speed every run in his first ENS in a few years, eventually setting the second best time of the last qualifier to move him to fourth overall.  The driver sitting second in the championship standings, Melvin Diekmann, didn’t have a great time in qualifying and will start sixth, just behind Quentin Leroux, but Diekmann is known for his pace in the longer finals – so don’t count out anyone in the top six on the grid!

Serpent designer Michael Salven got himself back to the front of the ENS today by securing the overall top qualifier position in the +40 Masters class.  Salven, who due to a busy racing schedule and his role supporting the wider Serpent team, has been only able to race at one other ENS this year and thus is not in contention for the overall title.

The car was perfect last night in Q1, but this morning it felt different.  I made some small changes and it was good again, but like always the field is so close.  For the final, I hope it’s like this again, but I have found a small problem with my engine, so I need to change to a back-up one to be safe, and the fuel consumption of this is unknown so that’s a slight worry, but it should be fine and we can check it in the Practice.  I just hope to be consistent as I think that will be the key to winning the final tomorrow.

Championship contender Arie Manten will start second on the grid, despite struggling in practice and seeding into the ‘B’ heat.  Manten will be ahead of two other drivers also in with a shout of winning the overall championship, as Morsten Muller and Lars Haugen put themselves in third and fourth respectively.  The top six is completed by two Belgian drivers, with Peter Thys leading his countryman John Lenaers.

Swiss driver Lars Schafer took the TQ in the first ever running of the 1/8 Sport class at the ENS.  It was a hard-faught battle with Markus Friedrich (Germany), after Markus topped the first two rounds.  Lars bounced back to set the pace in Q3 and Q4, with his Q4 time being the decisive tiebreaker.  American Alex Esser completes the top three ahead of the 30-minute A Final.Text 2