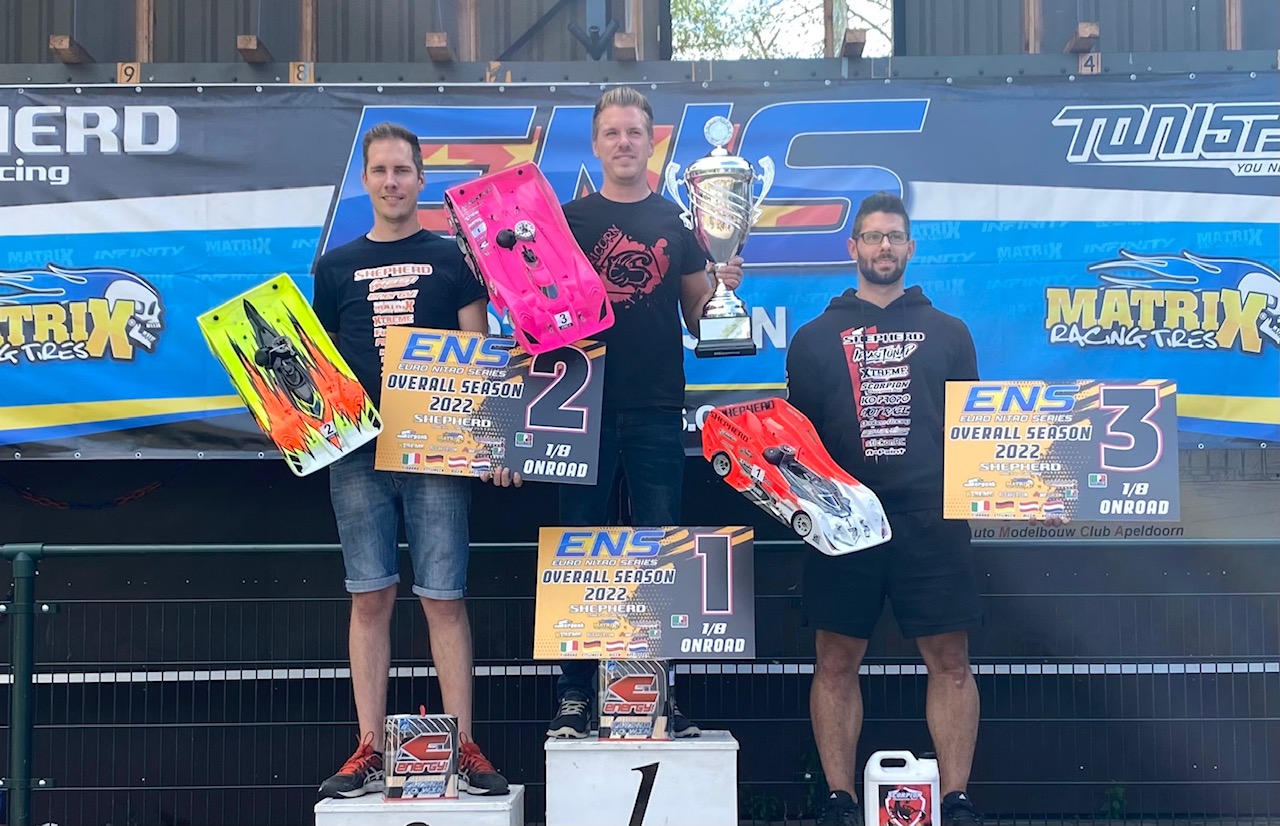 The finals of the last event of the 2022 Euro Nitro Series season took place on Sunday afternoon in Apeldoorn.  With two titles yet to be decided, let’s find out what happened in the long races and how the championships were decided.

Dominic Greiner secured his first ENS title in the 1/8 Scale class at the end of a nail-biting 45-minute final.  The 2020 ENS 1/10 Scale Champion started third on the grid, behind the Shepherd team-mates of Simon Kurzbuch and Toni Gruber.  Gruber led the field away, until just after the first fuel stop when Kurzbuch got past on the track to take the lead.  With the Shepherd drivers both running 4 and a half minutes on fuel, Greiner had cycled through to the lead initially after opting to stay out longer – stretching to just over 4:45 on a tank.  The top three proved to be the class of the field, opening up a near one-lap lead after the first set of stints.  At this point, Kurzbuch’s lead was putting him on-track for the title.

However, Greiner managed to find more speed and, helped as well by being able to save a fuel stop over the race distance, was very much in contention still, but needed to take victory to lift the overall season trophy.  Greiner eventually got past Gruber and then moved ahead of Kurzbuch during the first set of tyre changes.  Greiner took a four-tyre change at the 14-minute point, with Kurzbuch taking four fresh tyres after 17 minutes.  As the rest of the race played out, the two drivers exchanged the lead on each fuel stop, but the quick maths showed that Greiner would be just ahead if the two drivers continued to match pace and the Capricorn driver could indeed save the fuel stop.

Both drivers took their final fuel stop with just over four minutes remaining – Greiner emerging just two seconds in front of Kurzbuch.  Kurzbuch had the hammer down and closed the gap, and going into the final minute of the season was right behind his championship rival.  Despite the pressure from the driver who holds 16 ENS wins (equal to everyone else combined) and six championship titles, Greiner remained in front and crossed the line to take victory – and the championship – by seven tenths of a second.

Super!  It was a super close race, I could not afford to make any mistakes at all.  The conditions were a bit tricky with sometimes some wind gusts, but I managed to keep it on the road.  My team managed two perfect tyre stops, and it was nice that it was super close with Simon at the end of a tough season, especially as we were both running out of tyres.  I want to thank my sponsors and my pit crew of Tobias Kerler and Thilo Diekmann for all their work this year!  What a five weeks it has been!

Kurzbuch was clearly disappointed to lose out by such a small margin, but no doubt will be spurred on to come back stronger next season.  Without his father in the pit lane this weekend, his mechanic Alex Kemp was joined by Remy Hasler – and the team performed great stops but with margins so tight, it seemed Dominic and his team had the tiny edge they needed in the final.  Gruber maintained third in the race, keeping the top two honest, but with no mistakes from the out-going and in-coming champion, it seemed third was the best result possible – both in the race and the overall standings.

Despite the final not going as he wanted, suffering a flame out at quarter distance which put him multiple laps back, Timo Schroeder ended up “best of the rest” in the points, taking seventh in the race and fourth in the overall standings.  The star of the race was Belgium’s Steven Cuypers, running in fourth place from the first lap to the end, but he did not compete in enough events this year to make the top ten overall.

Groskamp Rounds Out Season With Another Victory

Already-crowned champion completed the 2022 ENS season with another victory following a measured drive in the 1/10 Scale final.  The champion of the 2015 and 2018 season (along with an ‘unofficial’ title from the 2021 season, which only ended up consisting of a single race and so no official championship was awarded) now can count six ENS victories, tying him with Dominic Greiner as the most successful driver in the class.  The fastest driver this weekend through all of practice and every qualifying round, Groskamp took his Infinity to a healthy lead early on, which allowed him to adjust his strategy mid-race, as he explained to us after:

In the race we decided to be safe after we saw the gap I had early on.  The first two fuel stops we ran 5 minutes, but then I told my pit-man Armin to go to 4:30 stints to be safe, as I knew I had enough speed.  We took four tyres at 20 minutes, but again we decided to be safe so I stopped again at 28 minutes to take another set of right-side tyres.  My pace was still really good, even if I decided to be safe!  Overall, it’s been a really good year for me.  This also feels great going into the World Championship, learning more about the car and the engine and especially the fuel milage I can get!  Big thanks to Armin for all his work in the pit lane all year!

Behind, Jilles’ team mate Milan Holthuis was initially his closest challenger, but after deciding to take two right-side tyres after just 10 minutes, he was stuck back in traffic and unable to move back through as quickly as he had hoped.  This allowed Melvin Diekmann, who had a qualifying to forget and started sixth on the grid, to come through to second place.  But hovering around one-lap behind Groskamp, the German Capricorn driver was never going to be able to challenge for his second victory of the year without mistakes from the experienced Dutchman.  The overall podium at the end of the race reflected the season standings – Diekmann second with Holthuis third.  Some of the best action on the track was in the battle for fourth place (which was for third for periods as Holthuis fought his way back up the field) – at the final flag it was Dirk Wischnewski taking the position ahead of Quentin Leroux.

The +40 Masters A Final featured a number of storylines – both in terms of the race and also the overall championship.  The field was led away by Michael Salven, who opened up a good lead early on, but wasn’t in contention for the overall title after not being able to race in enough events this year.  Arie Manten, starting second on the grid, held that position and with it had one hand on the title.  Meanwhile, Lars Haugen, in with a chance of the title, had slipped from fourth on the grid down to tenth, taking him out of contention.  First to shake things up was Manten, pitting early for tyres and dropping down the field, promoting Torsten Muller into second and moving him in with a shot of the championship.  At the ten-minute point, Salven hit troubles, his car having to be returned to the pits with a possible engine issue, costing him around three laps and dropping him to tenth.  This in turn moved Muller to the lead and with a very strong chance of the title, as Manten was stuck in around sixth place, unable to progress quickly through the traffic.  It also promoted John Lenaers, a three-time ENS winner, up to second in the race from sixth on the grid.

Just a couple of minutes later, Muller hit issues, forcing a retirement – from both the race and the title battle sadly.  This left Lenaers out in front, now heading fellow Belgian Peter Thys.  The second half of the race was less dramatic, as the two Belgians were able to click off consistent laps and Manten was able to recover to third place as the alternative fuel and tyre strategies worked through.  This left Haugen needing a miracle to stop the title heading back to Manten’s hands, and whilst the Norwegian was able to make progress, he ran out of time and ended up sixth overall.  Out front, Lenaers cruised to join Manten with the most victories in the Masters class at the ENS victory, with Thys taking his first podium in the series, whilst Manten crossed the line in third to secure the title he last held back in 2018.

It was a great season! We started badly with the DQ in Italy, but from there it just kept going up and up. It’s super nice for our whole team to have the success we have this year, I’m so happy for us all! And I want to thank Mario especially, plus everyone else who helps me at the races, it’s not possible without everyone together.

Swiss driver Lars Schafer took the win in the first ever running of the 1/8 Sport class at the ENS.  Leading from pole position, Schafer was in command of the final, securing victory over long-time ENS supporter Markus Friedrich, with American youngster Alex Esser rounding out the podium places.  The ENS will run the 1/8 Sport division as a full championship class next season, and we hope to see moany more entries and close races!

With the finals completed, all the action for the 2022 Euro Nitro Series is wrapped up.  The ENS Organisers would like to thank the clubs and staff of the four amazing host tracks – Fiorano, Ettlingen, Aigen and Apeldoorn, as well as all the series sponsors.  Of course, the biggest thanks goes to the drivers who have been part of the events this year – we hope to see you all and many more new faces when the ENS returns in 2023!